The gospel of Matthew 2:1–12 describes the visit of the Magi to Bethlehem and their adoration of Jesus the Christ. The magi (and the shepherds) of Bethlehem are the first people to adore Mary’s infant son Jesus as the promised Christ of God, the messiah and savior of the humankind: 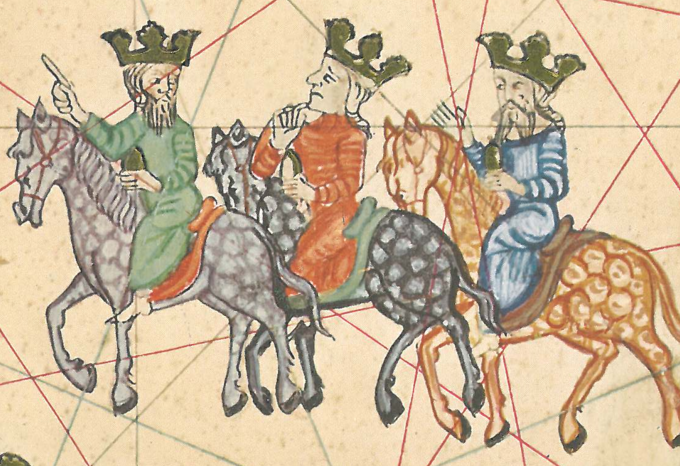 “Now when Jesus was born in Bethlehem of Judea in the days of Herod the king, behold, there came wise men [Greek: magos or magi] from the east to Jerusalem, Saying, Where is he that is born King of the Jews? for we have seen his star in the east, and are come to worship him. When Herod the king had heard these things, he was troubled, and all Jerusalem with him. And when he had gathered all the chief priests and scribes of the people together, he demanded of them where Christ should be born. And they said unto him, In Bethlehem of Judea: for thus it is written by the prophet, And thou Bethlehem, in the land of Judah, art not the least among the princes of Judah: for out of thee shall come a Governor, that shall rule my people Israel. Then Herod, when he had privily called the wise men, enquired of them diligently what time the star appeared. And he sent them to Bethlehem, and said, Go and search diligently for the young child; and when ye have found him, bring me word again, that I may come and worship him also. When they had heard the king, they departed; and, lo, the star, which they saw in the east, went before them, till it came and stood over where the young child was. When they saw the star, they rejoiced with exceeding great joy. And when they were come into the house, they saw the young child with Mary his mother, and fell down, and worshiped him: and when they had opened their treasures, they presented unto him gifts; gold, and frankincense, and myrrh. And being warned of God in a dream that they should not return to Herod, they departed into their own country another way.” Matthew 2:1-12 KJV

Western medieval traditions have greatly embellished Matthew’s testimony declaring the wise men to have been “three kings”, named Melchior (a Persian, i.e., Parthian Zoroastrian King and/or Priest or an Arbian who brought the gift of gold), Caspar (a black king from either Africa or India) and Balthazar (described as either a king of Arabia or a scholar from Babylon who brought the gift of Myrrh), and the three were formally canonized (sainted) by the western church. These names were derived from a Greek manuscript composed around A.D. 500 in Alexandria, Egypt which has been translated into Latin with the title Excerpta Latina Barbari.

Travelers from the Parthian Empire would have traveled via Damascus and from a Jewish perspective would have been said to come from the north, not the east. It is exceedingly unlikely that the biblical wise men were “Persians.” The far more probable, and historically likely reality is that the “wise men from the east” were wealthy Semitic Arab traders from the northern Arabian people of Nabataea (formerly the territory of the biblical Edomites). The Nabataeans prospered in Jordan, the southern Levant, the Sinai Peninsula and northwestern Arabian Peninsula from sometime before the time of Antigonus I (see 301 B.C.) and the Nabataean capital of Petra (near Amon, Jordan) which is due east of Jerusalem. These Nabataean traders were well known for mining gold in Nabataea, and trading in frankincense, and myrrh from Arabia Felix (southern Arabia around modern day Yemen) and fine silks (from China, see the silk routes c. 400 B.C.). One of the two southern maritime silk route terminal ports was the Nabataean port of Leuce Come (on the Red Sea; the other being the Egyptian port of Myos Hormos) The Nabataeans had become prosperous carrying gold, frankincense, myrrh and fine Chinese silks from Petra and Leuce Come to resell them at the Mediterranean port of Gaza. This Nabataean trade is well documented by the Greek historian Diodorus Siculus (50 B.C.) & the Greek geographer Strabo.